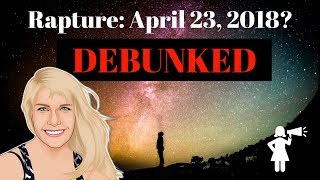 David Meade was picked up by news giants all over the world last week for his claims that the Rapture will "begin" on April 23, 2018. (I assume that term "begin" is being utilized so that when it becomes obvious that the Rapture didn't happen on that date, David and his followers can say, "Maybe not in full, but it 'began' on that day.") Date setters have been on the rise this past year, with David Meade being among the many who claimed the Rapture was to happen on September
95 views0 comments